There are two main themes to my research: Memory-Centered Cognition, and Human-Robot Interaction. While the overlaps between these may at times appear to be tenuous, I feel that in the long term, it is necessary to combine these, resulting in Social Cognitive Robots. These are both interesting and necessary for two primary applications: (1) making social robots more useful in assisting people in their daily lives, and (2) making use of cognitive robots as exploratory tools/platforms to investigate cognition and social behaviour to better understand ourselves as humans.

Below is just a brief outline of these themes, outlining the most significant aspects of each. For publications, please see my Publications Page.


Using social robots to assist people (specifically children) to learn in various contexts is a major theme of my research. I am interested in robots acting as peers, and using social interactions to help support the learning that children do anyway (in schools for example), to provide an augmented learning experience. Learning from human-human interaction, through this work I seek to develop robot behaviours that are better able to support children to learn, but also to learn about social interaction itself.

This work is in the context of the ALIZ-E project (with new work now being conducted as part of the DREAM project). The aim of this project is to extend the length of social interactions between robots and children from minutes to days and weeks. Two important themes emerge from this work: (1) believable any-depth interaction, which means (for example) that the robot system is robust to low quality sensory information, and resulting uncertain knowledge of child/environment state, and can nevertheless maintain an engaging interaction (this is a very difficult problem!), and (2) a strong commitment to testing and evaluation of systems 'in the wild', i.e. in settings that are typical for our subjects, and not for ourselves as roboticists, specifically schools and hospitals (extremely difficult both practically and methodologically).

My interest in this is to explore the role of Memory within such robotic systems capable of adaptive social interaction over extended periods of time. Starting from my perspective of memory in the wider context of cognition (see description below), my emphasis has been on how associative processes can be used for a number of purposes, including concept acquisition (a more abstract study), and multi-modal (and typically non-linguistic, i.e. behavioural) alignment within game-like interactions (see Sandtray description below).

Since early 2011, I have developed and continue to work on the Sandtray: a touchscreen-based setup for providing context to unstructured social human-robot interaction. Primarily focused on use with children in one-on-one interactions with the Nao humanoid robot, the Sandtray does not inherently provide an interaction structure, thus facilitating more naturalistic interaction on the part of the children.

The Sandtray has been very successful in its application to HRI studies. We've used it extensively in Plymouth, but it has also now found use in scientific evaluations in Italy and the Netherlands in the context of the ALIZ-E and DREAM projects, and other EU projects are now using similar touchscreen-based setups. It is continually undergoing refinement, development, and application to new domains: WoZ control, adaptive and autonomous robot behaviours, application to learning about nutritional content of food, robot teaching behaviours, etc.

Memory defines who we are and how we do the things we do. In my work on autonomous control for robots (latterly of the social variety, but I see it this way in general), the use of memory for ongoing behaviour is a central driving principle of my research, with consequences for the development and application of control architectures. I take a multidisciplinary perspective in this development work, and attempt not only to provide better cognitive control for interactive robots by learning from different fields of research (e.g. psychology), but also to feed back to these other fields. 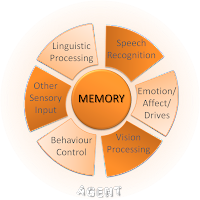 A New Perspective on Memory for Cognitive Robotics

This was the subject of my PhD research: the foundations of an application of a new perspective on what role memory should play, what it should be constituted of, and how it should interact with other aspects of autonomous cognition.

In essence, I developed a theoretical framework (of which I developed a minimal computational implementation on a mobile robot) describing the interaction of four main aspects (figure above): associative memory as the substrate for activation dynamics, value system, embodiment, and constructivist development - each of which interacting with one another in continuing interaction with the environment (thus an enactive approach).

Related to the new perspective is the question of cognitive architecture, which is the task to define a set of principles and mechanisms that define cognition (cognitive behaviour, cognitive 'processing', etc) in a domain general manner. In my view, taking inspiration from humans is a useful way forward, as we provide the best (not going into questions of optimisation...) example of high-level cognition - although learning from animal behaviour is frequently a useful way of elucidating the capabilities of humans (in a mechanistic manner).

In any case, with the perspective on memory that I have taken, this has some fairly fundamental consequences for cognitive architecture. For example, the question of knowledge/information representation is typically (but not always) based around symbol processing in current cognitive architectures. Symbols then can be manipulated using standard computing architectures in well defined ways: i.e. cognitive processing. Emphasising rather the sub-symbolic methodology that the memory-centered approach commits you to thus requires a re-adjustment of how cognitive processing is viewed[^1] (figure above). Building on my PhD work, this is a fascinating question that drives my current research.

[^1] note this doesn't necessarily result in a rejection of the symbol processing view (it has been very successful in accounting for a range of cognitive phenomena for example), but it does entail a focus on how sub-symbolic cognitive 'processing' can account for what is typically viewed as based on symbol processing mechanisms.