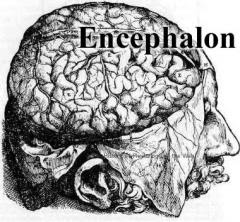 Welcome to the 29th edition of Encephalon, the (loosely) neuroscience based blog carnival, featuring some of the best blogging in this area from the past two weeks. As per usual, there are a wide range of subjects in this issue; from caffeine to steroids, and from cosmetics to infidelity...
History
Since the past has led to where we are today, we'll start with a

history lesson from Neurophilosophy on the rise and fall of the lobotomy. In this post, we are guided through the development of the lobotomy procedure into a widespread and somewhat popular treatment for a wide range of psychiatric disorders, to its ultimate demise due to misuse and the rise of drugs. The picture (taken from the post at Neurophilosophy) gives an idea as to the sometimes graphic detail that is given.
Cognitive enhancement

From the removal of large parts of the brain, we move to how we can enhance it without scalpel or capsule. First off we have SharpBrains who review an interview with Dr. Elkhonon Goldberg on cognitive enhancement and brain exercise. After an introduction to the history of neuropsychology, it moves on to discuss lifelong learning and the impact it can have on cognitive ability. In particular, challenging oneself with novel tasks is deemed to be vital, as the process of learning the piano for example has a good effect whether you are eighteen or eighty. Secondly, FitBuff looks at the 'Mozart effect' (picture taken from post), which supposedly increases cognitive ability and learning through listening to music in the baroque style. After looking at possible reasons why this effect could work, the conclusion is essentially that the effect is largely over-hyped, but that the effect of relaxation upon hearing the music should not be discounted.
Brain growth and memory formation
Now, improving cognitive ability non-invasively is of course to be desired, but at some point, a physical intervention is necessary. More specifically, an understanding of the structural and chemical factors in the development of the brain is important. From this perspective, we have GrrlScientists' entry on the influence of steroids on brain growth. It reviews a study on the development of song-control brain regions in song birds – in particular to test the prevailing view that this seasonal growth is dependent on hearing other song birds sing. However, through some manipulation, it was found that this is not the case: rather it is the production of steroids which drove the brain region growth, not environmental stimuli. The consequences for humans are interesting. Instead of stroke patients speech rehabilitation involving listening to tapes, perhaps it would be more effective to use growth stimulating hormones in the effected brain regions? Following on in a similar theme, The Neurocritic brings us a two-parter which reviews papers challenging the view that protein synthesis is necessary for memory formation. In the first part (Everything is wrong) it is suggested that rather than inhibiting the creation of proteins, drugs such as anisomycin actually cause massive fluctuations in neurotransmitter levels, which is proposed as the real cause of the observed memory impairment. In the second part (Anisomycin is strong), the mechanisms causing this are more closely examined, and the evidence against the prevailing view is reviewed.
Looking towards old age 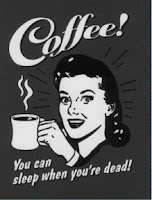 As the baby-boomers are due to retire at the end of the decade, SharpBrains brings us a look at the consequences, emphasising the role for continuing training in allowing those who wish to continue working through retirement to actually do so. Somewhat related to this, GrrlScientist reviews a paper in Neurology on the effect of coffee in elderly women (picture taken from post). The results were very interesting: it found that for women aged 65 and over, drinking three or more cups of coffee (or the equivalent caffeine intake in tea for example) a day aided in preventing some age-related memory declines. Furthermore, this effect was more pronounced the older the women were. Unfortunately, there was no observed effect in men. Finally in this section, since Alzheimer's is a disease affecting the elderly, we have a post from Brain Blogger on the possible presence of an Alzheimer related gene. Coming in three types, each type of this particular gene is responsible for the development of three thicknesses of the entorhinal cortex – and a thinning of this cortex is linked to the onset of Alzheimer's in later life.
Altruism
Next we have three related posts from Natural Rationality on altruism, morality and generosity, each looking at a number of papers and providing a discussion of the major views and research methodologies involved in each. Firstly, the post on altruism. Starting with an apt quote from Friends, this excellent overview goes on to describe the seeming incompatibility between altruism and an individuals 'genetic fitness' and how this is not actually the case. The differing altruism theories in humans and other animals are discussed, before a suggestion is made that actually, there should be no such divide made. Secondly is a post on morality and the brain, in which papers are reviewed in support of the two competing views: is morality emotion- or reason-based? The conclusion is that the issue has yet to be resolved, but that cognitive science has the tools to enable an empirical examination of the problem. Finally, we have a review of a paper presented at the economic science association conference which found that subjects in a game-playing scenario who were given oxytocin exhibited greater generosity tendencies. The suggestion is made that generosity is based on empathy, and that oxytocin 'boosts' empathy.
Beauty and relationships
For the beauty part: from The Neurocritic we have a post reviewing a recent study in Nature Medicine which announces the discovery of the use of non-toxic injections which allow the targeted reduction of fat deposits. Conducted in mice, the work described the stress related neural pathways supposedly responsible for excessive weight gain when stressed, and how the introduction of blockers in the areas prevented this increase in fat due to stress. The researchers were hopeful of the applications of his research to cosmetics and the control of metabolic syndrome. For the relationship part: building on previous research which has shown that women alter their sexual preferences based on where they are in their menstrual cycle, The Primate Diaries reports on a study which has shown that this information can be determined simply by looking into the womans eyes. Pupil dilation in response to looking at pictures of desirable men (including the womans partner and favorite film star for example) gave an indication of their sexual preferences at that particular time. The authors of the paper use a "dad versus cad" theory to explain this change in behaviour.
And that's it...
That's all for this issue of Encephalon, I hope it's been a decent one. Next host is due to be Neurofuture on the 27th of August. Entries can be made through the usual channels: the online form here, or send to encephalon{dot}host{at}gmail{dot}com. Until then!
Posted by Unknown at 17:24
Email ThisBlogThis!Share to TwitterShare to FacebookShare to Pinterest
Labels: Blogging, Encephalon, Links

That fitbuff link probably should have been left off. They aren't a neuroscience blog, it's purely for making money, it's an old over done story and it's crap.

Thanks for your comment anonymous. In response to your points: the fact it was posted on a non-neuroscience blog is in my opinion a non-issue; this blog isn't a neuroscience blog, and neither are the contributors of some of the posts in this issue. I agree with you about the ad content of the post though (am not a fan of embedded ads - but that's just a personal preference), but I included the post because, from my understanding, it introduces some arguments against the effect (or rather one of the main critics), rather than blindly proposing the Mozart effect as fact and pushing ads for products on the back of that. Having said all that, there may be many others who share your opinion (which I welcome), but I stand by its inclusion, and hope that you enjoyed this Encephalon issue nonetheless.