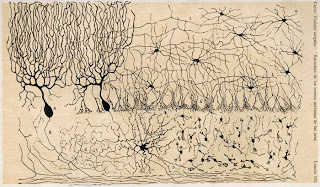 Welcome to the 56th edition of Encephalon, here at Combining Cognits. After the emerald anniversary a fortnight ago, I felt I had to find some significance for this issue number – and so I turned to the infinite wisdom of Wikipedia and found the answer (wait for it...):

56 (fifty-six) is the natural number following 55 and preceding 57.

So there we have it. Who said Wikipedia was useless* :-) Anyways, moving swiftly on, we have in this edition we have a nice range of submissions, though dual themes seemed to emerge: Anti-social behaviour, and the somewhat predictable Brains (code for 'I can't quite find a category to cover the rest, even though they're each interesting')**.

With anti-social behaviour being of growing concern in the U.K. at least, with multiple thousands of complaints to the authorities every day, a recently published paper in Biological Psychiatry on cortisol and aggressive behaviour has received a lot of media attention. This paper has been taken up by two of our submitting authors. The Neurocritic provides us with an overview of the paper, highlighting the differing levels of cortisol in subjects with a “Conduct Disorder” with control subjects when performing a frustrating game. Daniel at Neuroanthropology also looks at this paper, but he takes a much more critical line, and broadens his discussion to much wider issues: from criticising the methodology of the study itself, to the media hyping almost beyond recognition (a pet hate for most people methinks), and a commentary on general societal attitudes towards misbehaving youths. A nice discussion piece I feel.

One factor which has pointed to as being a major contributor to anti-social behaviour is alcohol. Besides the social effects, the personal and physiological effects are very pronounced. Jared at Brain Blogger takes us through some of these effects – what it does to cells and tissues, and the potential effects (albeit on a longer time-scale) on the bodily organs and brain, specifically mentioning Korsakoffs syndrome (which has in past been the subject of my personal interest).

One property of alcohol which can make its effects far worse (and which is in common with narcotic substances) is that it can be very addictive, which may lead to the personal and social problems previously mentioned. Dr. Shock brings us an overview of addiction, and raises the possible use of deep-brain stimulation methods to counteract it. (In a pertinent post, Vaughan at Mind Hacks recently posted a list of DBS-related applications)

Going back to our theme of anti-social behaviour: let's say the police pick you up and charge you for some transgression of the law. However, the media (here at least) seems to delight in telling the occasional story of how some obviously guilty (and non mentally impaired) crook has got off free (or lightly at least) with a tale of mental problems. Now clearly, each case must be taken on its individual merits (and I wish to make no general statement regarding the validity of any such claims of mental impairment), but Joshua at Science Blog takes us through a problem with such a legal defence. Given that cognitive science holds that all human behaviour comes from the 'brain' (or more generally the CNS), to say that your brain 'made you do the deed' is a perfectly accurate statement in all cases. In Joshua's words: “...most people prefer that the legal system only punish those who are responsible for wrongdoing. If we exclude from responsibility everybody whose actions are caused by their brains, we must exclude everybody.” There's a bit more to it than that though: what if someone has a genuine problem which has not yet been characterised?

Jared of Brain Blogger brings us a summary of a paper on the impairments in empathy that many people suffer after undergoing a traumatic brain injury. However, it is not as simple as it may first appear: there didn't appear to be a relationship between severity of the brain trauma and the empathy deficiency, nor could the low empathy scores be predicted by measures of emotion.

Next comes a subject very close to my own interests: Chris Hallquist of Biology of Mind discusses consciousness and qualia, though particularly pointing out the shortcomings of introspection.

Dan of “Sports are 80% Mental” brings us a review of a paper on the six elements of a momentum chain: elements of a sporting event which, when they occur, have an effect on the performance of the athletes, and the outcome of the game, and which typically result from a “precipitating event”. An interesting perspective on the effect of affect and cognition on sport, and things can change very quickly.

Walter of Highlight Health reviews a study of the molecular characterisation of brain tumours, which is based on the Cancer Genome Atlas (TCGA). In the words of Walter, the TCGA “...is an integrated network of clinical sites, core resources and specialized genome characterization and genome sequencing centers that work together to accelerate our understanding of the molecular basis of cancer”. This study in particular identified a number of pathways central to brain tumours, and importantly used a “...statistically robust number of samples...”. The post provides the details, so best not to rely on my paraphrasing.

With two late entries, we have a review of a book by James Zull on teaching methods based on the neurobiology of learning, and a review of recent developments in cognitive health and brain fitness, both from SharpBrains.

o~~~~~~o
And finally, if you're short of reading, we have from Neuroanthropology a compilation of links on various subjects – particularly the section on “The Brain”.

That's it from me and this edition, I hope it has approached the level of interest and quality I have come to expect from Encephalon. In a fortnight's time, the 57th edition will be brought to us by the ever stimulating Mind Hacks. Submissions in the usual fashion: send a title, URL and summary to encephalon.host ~at~ gmail ~dot~ com.

o~~~~~~o
* Incidentally, I don't – I'm just being facetious. As a first stop (followed by many other more academically reputable stops), it can be a very useful resource for general indicative definitions and pointers to more information.
** Although I have to admit, I have performed some very unsubtle shoe-horning to fit the entries to these themes – for which I apologise.
Posted by Unknown at 12:19
Email ThisBlogThis!Share to TwitterShare to FacebookShare to Pinterest
Labels: Consciousness, Encephalon, Links, Neuroscience